What is International Whores’ Day?

June 2nd, International Whores Day (also known as Día Internacional de las Putas, PutaDei, International Sex Workers Day, Día Internacional de la Trabajadora Sexual) is a day to gather sex working people, their co-conspirators, accomplices, loved ones and communities together in protest to demand an immediate cessation of police and state violence, the end of whorephobia, stigma and shaming, and call for the decriminalization of all sex work now! This is a day to assert collective power and make demands!

*Rallying cries that have been suggested:

No more “Walking while black and trans” arrests or attacks from cops and violent clients!

No more incarceration for self-defense!

Our actions must center and lift up our most vulnerable community members. The police most often target immigrant, undocumented, POC, trans, gnc, and cash poor workers. We want to amplify the ongoing struggles within these (often intersecting) communities for self-determination, respect and liberation and rally around those who also face oppression as people engaged in any aspect of sex work/trade. All (sex) workers deserve dignity, respect and should be able to work in safe conditions free from harassment, that they determine. We deserve the right to work together, collectively and to form workers’ organizations and unions. We deserve for our labor to be seen as valid and valuable.

The New York Police Department came for Yang Song. The Cook County Sheriff’s Department came for Alisha Walker. The Prince George’s County cops came for GiGi Thomas. We say no more. Sex work is work, but today goes beyond labor to demand we can not only survive, but thrive.

(Can be added to/customized/expanded on for your local needs!)

-Decriminalization (this is not pie in the sky, look at fucking New Zealand)

-No more racial and whore profiling

Black and brown trans women are our SW movement foremothers, honor their legacy by centering those still leading this resistance. Sylvia Rivera, Marsha P. Johnson, founders of the Street Transvestite Action Revolutionaries (formed in 1970)  fought racist, anti-queer cops at the StoneWall riots in 1969. Miss Major, Director of the Transgender Gender Variant Intersex Justice Project was the backbone for San Francisco ho resistance community, think of the Compton’s Cafeteria riots of 1966! Miss Major continues supporting and leading community in Arkansas and around the world. The end of whorephobia and transphobia are our combined project. Our strongest comrades in the struggle for sex workers’ rights have always been our queer and trans fam. The National Center for Transgender Equality continued this solidarity by opposing FOSTA/SESTA, Glits Inc. founder Ceyenne Doroshow has spoken out about how these bills will devastate working people, specifically black trans women.

Okay, so where does “International Whores Day” come from? June 2nd of each year commemorates the 1975 occupation of Saint-Nizier Church in Lyon France by more than a hundred sex working people who were protesting police terror and brutality. At the time sex workers demanded, among other things, an end to police harassment, the re-opening of the hotels where they worked, and the scrapping of anti-pimping laws that targeted their lovers, co-workers and friends. The day is actively celebrated and organized around in Central and South America (with especially large demonstrations in Argentina, Peru, Mexico City, Brazil), Spain, India, the UK, France, Germany most actively.

Two years prior to the French church occupation, in 1973, Margot St. James founded the organization COYOTE (Call Off Your Old Tired Ethics), which advocates decriminalization of prostitution. In 1999, she was instrumental in founding the St. James Infirmary Clinic, a medical and social service organization serving sex workers in San Francisco.

We’ve seen labor struggle victories, for instance the winning of an SEIU sponsored union at the Lusty Lady in 1997. We’ve seen sex workers at the forefront of harm reduction work like clean needle exchange and syringe clean-up programs, and folks who trade sex at the helm of HIV and AIDS awareness. Sex workers, always leading in community efforts of safety and workers rights.

Think about how people around the world now know activist and scholar Monica Jones’ name because after speaking at a protest against a Phoenix law which allows police to arrest anyone suspected of “manifesting prostitution” in 2014. Jones accepted a ride home after visiting a bar, and the undercover officer driving the car arrested her under the law that she had been protesting. She was walking while black and trans, targeted as a sex worker, and arrested for this.

Remember how our Turkish comrade Hande Kader fought against state repression and police violence in Turkey. She centered the fights for sex workers’ rights and trans liberation in her organizing and during protests and clashes with police. She was killed in 2016 as a result of her being a resistance fighter, trans woman and sex worker.

For a more comprehensive timeline and extensive whorestory, check out the great resource: http://www.nswp.org/timeline/all/67

People should feel empowered to engage in whatever direct autonomous actions they have capacity to organize locally. Whether that be outdoor public protest, occupying city hall, organizing an indoor knowledge share and awareness raising event, organizing a panel at a college campus, marching/rolling to a meeting point to rally, making an art protest installation, doing an overpass banner drop, flashmob, etc. Do what feels right for you and your community! Ask what people’s capacities are and plan accordingly. Whether you organize an “International Whores Day,” a “PutaDei” or call it an “International Sex Workers Day,” event, know that you are connected to a global day of action with sex working/trading people all around the world!

If you are planning a protest/demonstration or any other public space gathering that the city might send law enforcement in response to, reach out to local National Lawyers Guild chapters to have them as legal observers (“green hats”)! They offer direct support to all protesters, and are especially helpful in the event of a protest based arrest. Does your local sex worker support group work with social justice legal service providers? Ask them to attend! https://www.nlg.org

It might seem obvious, but only organize what feels right and has the risk assessment that your community is prepared for. Not everyone can attend a march or occupy city hall, so think through and strategize other crucial ways for folx to plug in solidarity.

*Visuals: Use the symbol of the red umbrella! This day is from where it originates! Go big and bold, use lots of RED! The sky’s the limit for your creativity!

(another variation for example is #InternationalSexWorkersDay)

To have IWD become as popular in the US as a day of action for sex working people as it is around the world. To intentionally assert SWer voices directly into conversations about police and state violence against black and trans folks. To train up accomplices and co-conspirators in unapologetic defense of sex workers. To grow a movement against whorephobia, whore shaming and stigma. To talk expressly about the dangerous effects criminalization (arrest, detention, incarceration, inability to report violence against us, inability to access other types of work, having our children taken away, death) has on our communities.

To introduce new community members to parts of our whorestory that directly confront police and state violence, and criminalization in its many forms and to inspire advocacy, activism and resistance among all sex working people toward the collective project of chiefly fighting racism, transphobia and whorephobia.

“Hundreds of sex workers occupied a total of five French churches during the strike. Many more of the approximately 20,000 French sex workers nationwide “downed tools” in solidarity.”

“But that’s exactly why we need holidays like International Whores’ Day: to humanize a group who have had the word “whore” spat at them for centuries.”

“So why revel in a term as strong as “whore”? “I don’t mind being called a whore by my sisters in whoredom,” she says. “In the beginning it wasn’t even a bad word. ‘Whore’ is a word we reclaimed to be used by ourselves to take the sting out.”

“Our children don’t want their mothers in jail” and a chant was sung. The protest which lasted 8 days, ended when police raided the church on the basis that it was creating public disorder.”

“Only sadly, after a few days, police did what they do and busted in with some batons. The protest ended with the women being arrested and beaten. But many of the Lyon sex workers had their fines written off; legit police investigations into unsolved sex worker murders were launched; and the event sparked similar protests in Marseilles and Paris.”

Article on the combined action of SlutWalk & IWD in Mexico City in 2011: 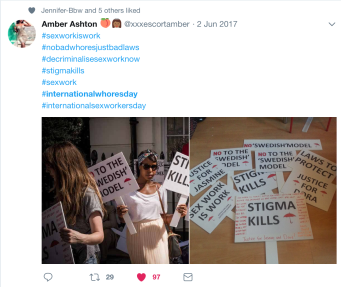 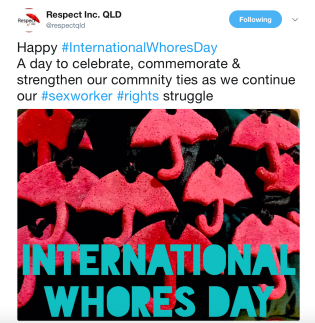